Submit your Swift, iOS, macOS, or related talks to the best tiny conference in the world! Join us for the 12th /dev/world! The Call for Presenters is now open at https://devworld.com.au/

The conference that I help run, /dev/world/2018, is selling tickets!

We have amazing keynotes from the following people:

And we have workshops!

We’ll also have a dinner keynote, during our famous quiz, from Paul Fenwick! It’s going to be amazing! Grab a ticket? 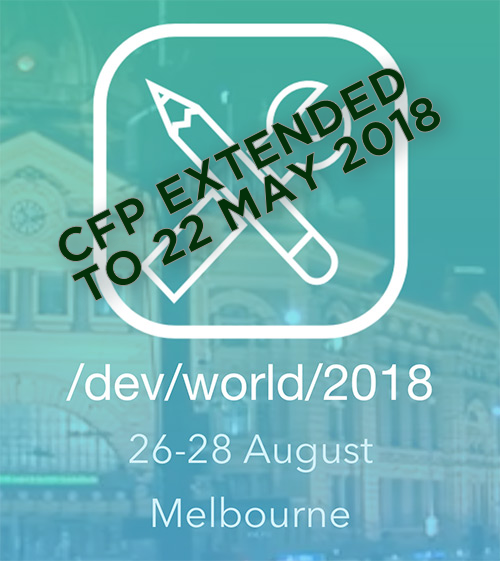 Way back in 2008 I spoke at the first edition of a little conference called /dev/world… it was a great experience, and one that really helped me find my feet in the software development community, and especially in the Apple technology community. It was fabulous.

I spoke at every /dev/world from then on, up to and including 2012, and since then I’ve been helping my friend Tony Gray run the conference (along with Tim Nugent, Jon Manning, and a few other ne’er-do-wells). /dev/world/2017 will be the 10th edition of /dev/world, and I couldn’t be more excited.

We’ve got an amazing lineup of presenters, including keynotes from Sal Soghoian (former head of user automation at Apple, including AppleScript and Automator), Marc Edwards, Russell Ivanovic, Jake MacMullin, and Matt Gallagher, and talks on everything from accessibility to ARKit to Swift Promises to Unity 3D. Early bird tickets are available at devworld.com.au for the rest of this week! 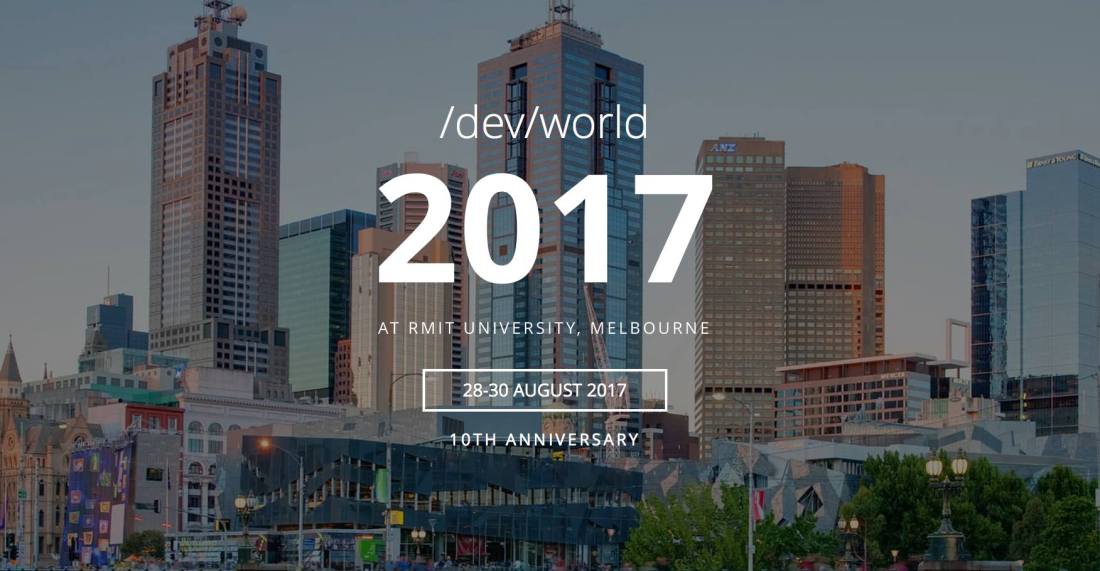 /dev/world totally changed my professional life, and we’ve worked hard to create a programme for the 10th /dev/world that’s deserving of the legacy and name! Join us?

/dev/world/2016 tickets are now on sale! /dev/world is a fabulous iOS and OS X (and associated ecosystem) developer conference that played no small part in kickstarting many parts of my career, and for the last few years I’ve been helping to organise the event.

/dev/world/2016 runs in Melbourne on August 29-31, 2016. The conference covers developing on and for iOS and OS X, using Swift to Objective-C, and everything in between. We’re selling our best-priced early bird tickets right now over at devworld.com.au

We’ll be announcing more and more sessions, workshops, and feature presentations over the coming week. I’d love to see you in Melbourne! Let me know if you have any questions, or would like to sponsor the event.

I have the privilege of helping to organise /dev/world/2015, a conference for those developing for, and on, iOS and OS X. It’s a special privilege

because our experiences with early /dev/world conferences back in 2008 helped us develop connections in the early iOS developer community, and ultimately start our company.

I therefore think that everyone should go to /dev/world, and there is one way to get there at no cost. Pretty exciting!

Option 2 is to be a student at a University in Australia or New Zealand, and then join the AUC (it cost a mere $50). Once you’re a member of the AUC, in addition to getting access to discounted tickets to all our other events, you also get free admission to /dev/world/2015. Yep, totally free.

If you’re not a student,  you can get a discounted Early Bird ticket until 3 August 2015. If you have a question, feel free to email me: paris AT paris.id.au

One of my favourite conferences ever, /dev/world/2014, is running for the 7th time this year. Once again it’s in Melbourne, and once again I’m speaking!

Check it out at http://www.devworld.com.au – tickets are available now!

You might also be looking for my partner, Mars, or my friends and colleagues, Dr Jon, or Dr Tim.